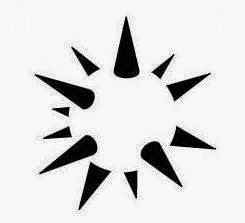 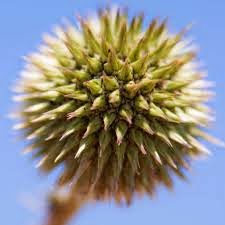 What is a brand? Metaphorically, the brand is the white sphere in the middle of this figure, that is, the ball surrounded by the radiating black cones. Of course, no ball has been drawn, just the conic thorns positioned so that we construct the sphere as an organizing structure (a form of reification in Gestalt psychology). Both perception and cognition organize input into Gestalts or Wholes generalizing previously learned forms and configurations.

It is because we are familiar with pictures like the following that we impose an organization on the black objects and "see" a ball with spikes. You did not need to be thinking about "spikey balls" for the figure recruits its own interpretative frame. Similarly, brands and product categories impose structure on feature sets. The brand may be an associative net (what comes to mind when I say "McDonald's"), but that network is built on a scaffolding that we can model using R.

In a previous post, I outlined how product categories are defined by their unique tradeoff of strengths and weaknesses. In particular, the features associated with fast food restaurants fall along a continuum from easy to difficult to deliver. Speed is achievable. Quality food seems to be somewhat harder to serve. Brands within the product category can separate themselves by offering their own unique affordances.

My example was Subway Sandwich offering "fresh" fast food. Respondents were given a list of 8 attributes (seating, menu selection, ease of ordering, food preparation, taste, filling, healthy and fresh) and asked to check off which attributes Subway successfully delivered. 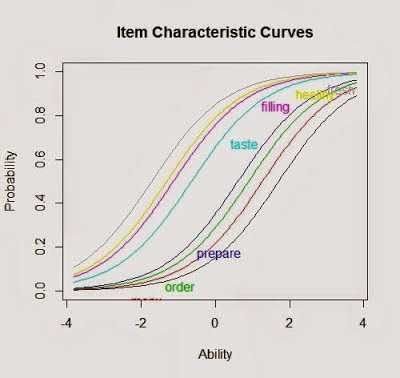 The item characteristic curves in the above figure were generated using the R package ltm (latent trait modeling). The statistical model comes from achievement testing, which is why the attribute is called an item and the x-axis is labeled as ability. Test items can be arrayed in terms of their difficulty with the harder questions answered correctly only by the smarter students. Ability has been standardized, so the x-axis shows z-scores. The curves are the logistic functions displaying how the probability of endorsing each of the eight attributes is a function of each respondent's standing on the x-axis. Only 6 of the 8 attribute names can be seen on the chart with the labels for the lowest two curves, menu and seating, falling off the chart.

The zero point for ability is the average for the sample filling in the checklist. The S-curve for "fresh" has the highest elevation and is the farthest to the left. Reading up from ability equals zero, we can see that on the average more than 80% are likely to tell us that Subway serves fresh food. You can see the gap between the four higher curves for fresh, healthy, filling and taste and the four lower curves for preparation, ordering, menu and seating. The lowest S-curve indicates that the average respondent would check seating with a likelihood of less than 20%.

What is invariant is the checklist pattern. Those who love Subway might check all the attributes except for the bottom one or two. For example, families may be fine with everything but the available seating. On the other hand, those looking for a greasy hamburger might reluctantly endorse fresh or healthy and nothing else. As one moves from left to right along the Ability scale, the checklist is filled in with fresh, then healthy, and so on in an order reflecting the brand image. Fresh is easy for Subway. Healthy is only a little more difficult, but seating can be a problem. Moreover, an individual who is happy with the seating and the menu is likely to be satisfied with the taste and the freshness of the food. Response patterns follow an ordering that reflects the underlying scaffolding holding the brand concept together.

Latent trait or item response theory is a statistical model where we estimate the parameters of the equation specifying the relationship between the latent x-axis and response probability. R offers nonparametric alternatives such as KernSmoothIRT and princurve. Hastie's work on principal curves may be of particular interest since it comes from outside of achievement testing. A more general treatment of the same issues enables us to take a different perspective and see how observed responses are constrained by the underlying data generation process.

Branding is the unique spin added to a product category that has evolved out of repeated interactions between consumer needs and providers skill to satisfy those needs at a profit. The data scientist can see the impact of that branding when we model consumer perceptions. Consumers are not scientists running comparative tests under standardized conditions. Moreover, inferences are made when experience is lacking. Our take-out only customer feels comfortable commenting on seating, although they may have only glanced on their way in or out. It gets worse for ratings on scales and for attributes that the average consumer lacks the expertise to evaluate (e.g., credence attributes associated with quality, reliability or efficacy).

We often believe that product experience is self-evident and definitive when, in fact, it may be ambiguous and even seductive. Much of what we know about products, even products that we use, has been shaped by a latent structure learned from what we have heard and read. Even if the thorns are real, the scaffolding comes from others.