Modeling Plenitude and Speciation by Jointly Segmenting Consumers and their Preferences

In 1993, when music was sold in retail stores, it may have been informative to ask about preference across a handful of music genre. Today, now that the consumer has seized control and the music industry has responded, the market has exploded into more than a thousand different fragmented pairings of artists and their audiences. Grant McCracken, the cultural anthropologist, refers to such proliferation as speciation and the resulting commotion as plenitude. As with movies, genre become microgenre forcing recommender systems to deal with more choices and narrower segments. 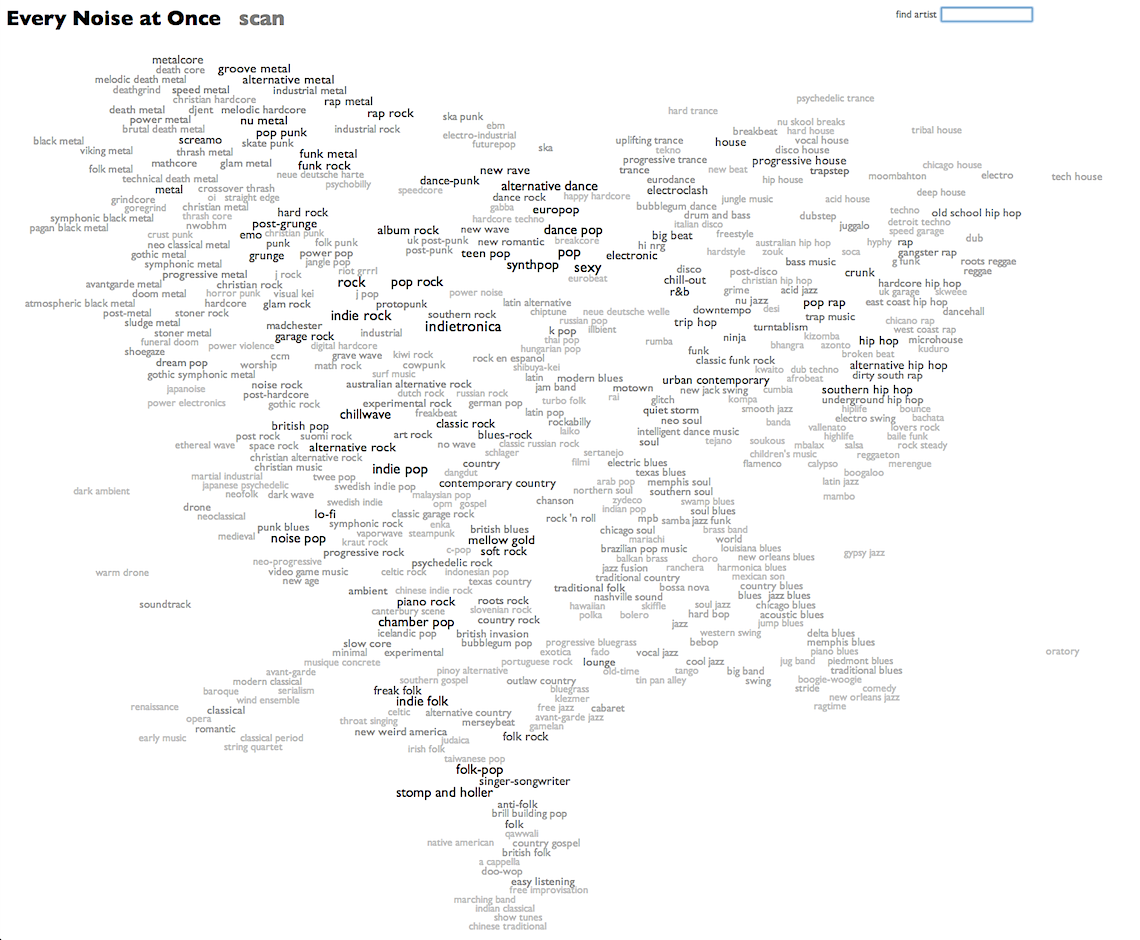 This mapping from the website Every Noise at Once is constantly changing. As the website explains, there is a generating algorithm with some additional adjustments in order to make it all readable, and it all seems to work as an enjoyable learning interface. One clicks on the label to play a music sample. Then, you can continue to a list of artists associated with the category and hear additional samples from each artist. Although the map seems to have interpretable dimensions and reflects similarity among the microgenre, it does not appear to be a statistical model in its present form.

At any given point in time, we are stepping into a dynamic process of artists searching for differentiation and social media seeking to create new communities who share at least some common preferences. Word of mouth is most effective when consumers expect new entries and when spreading the word is its own reward. It is no longer enough for a brand to have a good story if customers do not enjoy telling that story to others. Clearly, this process is common to all product categories even if they span a much smaller scale. Thus, we are looking for a scalable statistical model that captures the dynamics through which buyers and sellers come to a common understanding.

Borrowing a form of matrix factorization from recommender systems, I have argued in previous posts for implementing this kind of joint clustering of the rows and columns of a data matrix as a replacement for traditional forms of market segmentation. We can try it with a music preference dataset from the R package prefmod. Since I intend to compare my finding with another analysis of the same 1993 music preference data using the new R package RCA and reported in the American Journal of Sociology, we will begin by duplicating the few data modifications that were made in that paper (see the R code at the end of this post).

In previous attempts to account for music preferences, psychologists have focused on the individual and turned to personality theory for an explanation. For the sociologist, there is always the social network. As marketing researchers, we will add the invisible hand of the market. What is available? How do consumers learn about the product category and obtain recommendations? Where is it purchased? When and where is it consumed? Are others involved (public vs private consumption)?

The Internet opens new purchase pathways, encourages new entities, increases choice and transfers control to the consumer. The resulting postmodern market with its plenitude of products, services, and features cannot be contained within a handful of segments. Speciation and micro-segmentation demand a model that reflects the joint evolution where new products and features are introduced to meet the needs of specific audiences and consumers organize their attention around those microgenre. Nonnegative matrix factorization (NMF) represents this process with a single set of latent variables describing both the rows and the columns at the same time.

After attaching the music dataset, NMF will produce a cluster heatmap summarizing the "loadings" of the 17 music genre (columns below) on the five latent features (rows below): Blues/Jazz, Heavy Metal/Rap, Country/Bluegrass, Opera/Classical, and Rock. The dendrogram at the top displays the results of a hierarchical clustering. Although there are five latent features, we could use the dendrogram to extract more than five music genre clusters. For example, Big Band and Folk music seem to be grouped together, possibly as a link from classical to country. In addition, Gospel may play a unique role linking country and Blues/Jazz. Whatever we observe in the columns will need to be verified by examining the rows. That is, one might expect to find a segment drawn to country and jazz/blues who also like gospel. 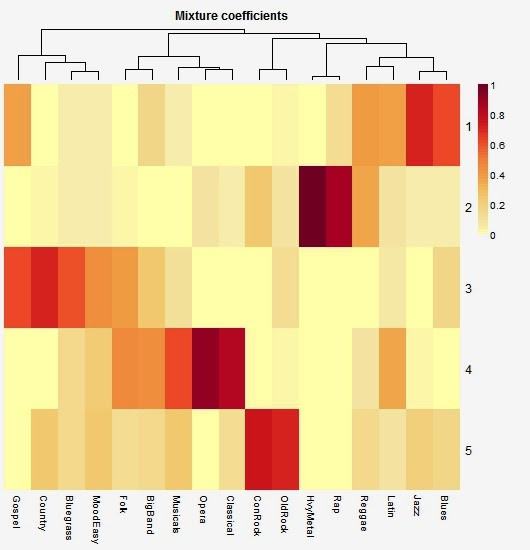 We would have seen more of the lighter colors with coefficients closer to zero had we found greater separation. Yet, this is not unexpected given the coarseness of music genre. As we get more specific, the columns become increasingly separated by consumers who only listen to or are aware of a subset of the available alternatives. These finer distinctions define today's market for just about everything. In addition, the use of a liking scale forces us to recode missing values to a neutral liking. We would have preferred an intensity scale with missing values coded as zeros because they indicate no interaction with the genre. Recoding missing to zero is not an issue when zero is the value given to "never heard of" or unaware.

Now, a joint segmentation means that listeners in the rows can be profiled using the same latent features accounting for covariation among the columns. Based on the above coefficient map, we expect those who like opera to also like classical music so that we do not require two separate scores for opera and classical but only one latent feature score. At least this is what we found with this data matrix. A second heatmap enables us to take a closer look at over 1500 respondents at the same time. 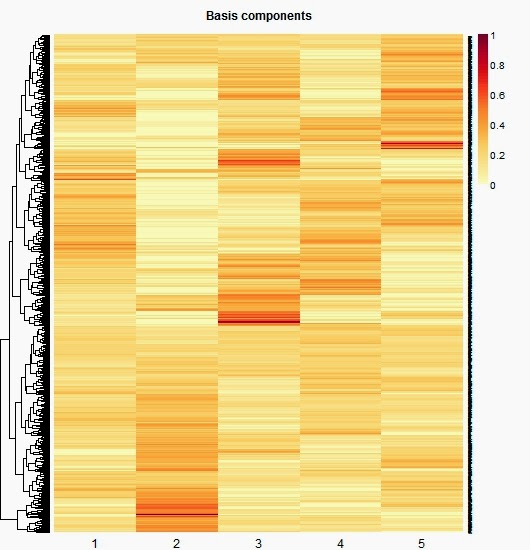 We already know how to interpret this heatmap because we have had practice with the coefficients. These colors indicate the values of the mixing weights for each respondent. Thus, in the middle of the heatmap you can find a dark red rectangle for latent feature #3, which we have already determined to represent country/bluegrass. These individuals give the lowest possible rating to everything except for the genre loading on this latent feature. We do not observe that much yellow or lighter colors in this heatmap because less than 13% of the responses fell into the lowest box labeled "dislike very much." However, most of the lighter regions are where you might expect them to be, for example, heavy metal/rap (#2), although we do uncover a heavy metal segment at the bottom of the figure.

We often think of liking as a bipolar scale, although what determines attraction can be different from what drives repulsion. Music is one of those product categories where satisfiers and dissatisfiers tend to be different. Negative responses can become extreme so that preference is defined by what one dislikes rather than what one likes. In fact, it is being forced to listen to music that we do not like that may be responsible for the lowest scores (e.g., being dragged to the opera or loud music from a nearby car). So, what would we find if we collapsed the bottom three categories and measured only attraction on a 3-point scale with 0=neutral, dislike or dislike very much, 1=like, and 2=like very much?

NMF thrives on sparsity, so increasing the number of zeros in the data matrix does not stress the computational algorithm. Indeed, the latent features become more separated as we can see in the coefficient heatmap. Gospel stands alone as its own latent feature. Country and bluegrass remain, as does opera/classical, blues/jazz, and rock. When we "remove" dislike for heavy metal and rap, heavy metal moves into rock and rap floats with reggae between jazz and rock. The same is true for folk and easy mood music, only now both are attractive to country and classical listeners. 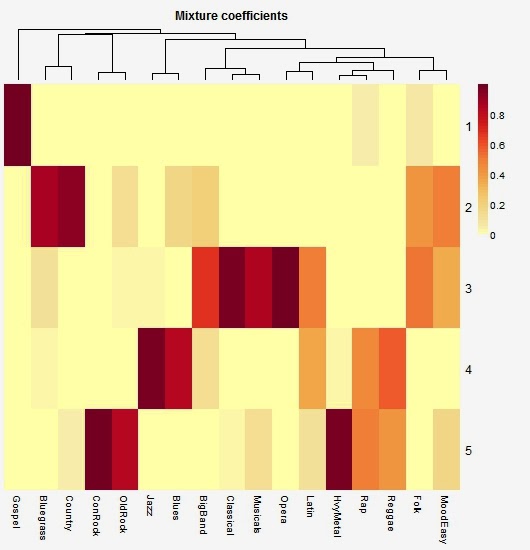 More importantly, we can now interpret the mixture weights for individual respondents as additive attractors so that the first few rows are the those with interest in all the musical genre. In addition, we can easily identify listeners with specific interests. As we continue to work our way down the heatmap, we find jazz/blues(#4), followed by rock(#5) and a combination of jazz and rock. Continuing, we see country(#2) plus rock and country alone, after which is a variety of gospel (#1) plus some other genre. We end with opera and classical music, by itself and in combination with jazz. 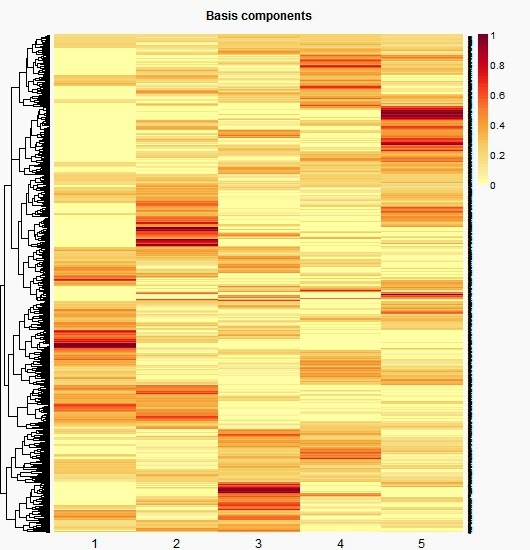 Comparison with the Cultural Omnivore Hypothesis

As mentioned earlier, we can compare our findings to a published study testing whether inclusiveness rules tastes in music (the eclectic omnivore) or whether cultural distinctions between highbrow and lowbrow still dominate. Interestingly, the cluster analysis is approached as a graph-partitioning problem where the affinity matrix is defined as similarity in the score pattern regardless of mean level. All do not agree with this calculation, and we have a pair of dueling R packages using different definitions of similarity (the RCA vs. the CCA).

None of this is news for those of us who perform cluster analysis using the affinity propagation R package apcluster, which enables several different similarity measures including correlations (signed and unsigned). If you wish to learn more, I would suggest starting with the Orange County R User webinar for apcluster. The quality and breadth of the documentation will flatten your learning curve.

Both of the dueling R packages argue that preference similarity ought to be defined by the highs and lows in the score profiles ignoring the mean ratings for different individuals. This is a problem for marketing since consumers who do not like anything ought to be treated differently from consumers who like everything. One is a prime target and the other is probably not much of a user at all.

Actually, if I were interesting in testing the cultural omnivore hypothesis, I would be better served by collecting familiarity data on a broader range of more specific music genre, perhaps not as detailed as the above map but more revealing than the current broad categories. The earliest signs of preference can be seen in what draws our attention. Recognition tends to be a less obtrusive measure than preference, and we can learn a great deal knowing who visits each region in the music genre map and how long they stayed.

NMF identifies a sizable audience who are familiar with the same subset of music genre. These are the latent features, the building blocks as we have seen in the coefficient heatmaps. The lowbrow and the highbrow each confine themselves to separate latent features, residing in gated communities within the music genre map and knowing little of the other's world. The omnivore travels freely across these borders. Such class distinctions may be even more established in the cosmetics product category (e.g., women's makeup). Replacing genre with brand, you can read how this was handled in a prior post using NMF to analyze brand involvement.

R code to perform all the analyses reported in this post
Created by Pretty R at inside-R.org
Posted by Joel Cadwell at 10:52 AM